Planning a trip to the bustling and lively Greek capital is an experience of a lifetime offering ventures that are hard to reproduce elsewhere.

The birthplace of democracy, the Olympic Games, philosophy, and so many more welcome visitors with a plethora of spectacular sites and soils drenched with history and culture. We offer you below an illustrative itinerary for those intended to stay 2 days in Athens.

Although merely enough time to see it all, you can still soak up a great deal of Greek allure and create indelible, everlasting memories! 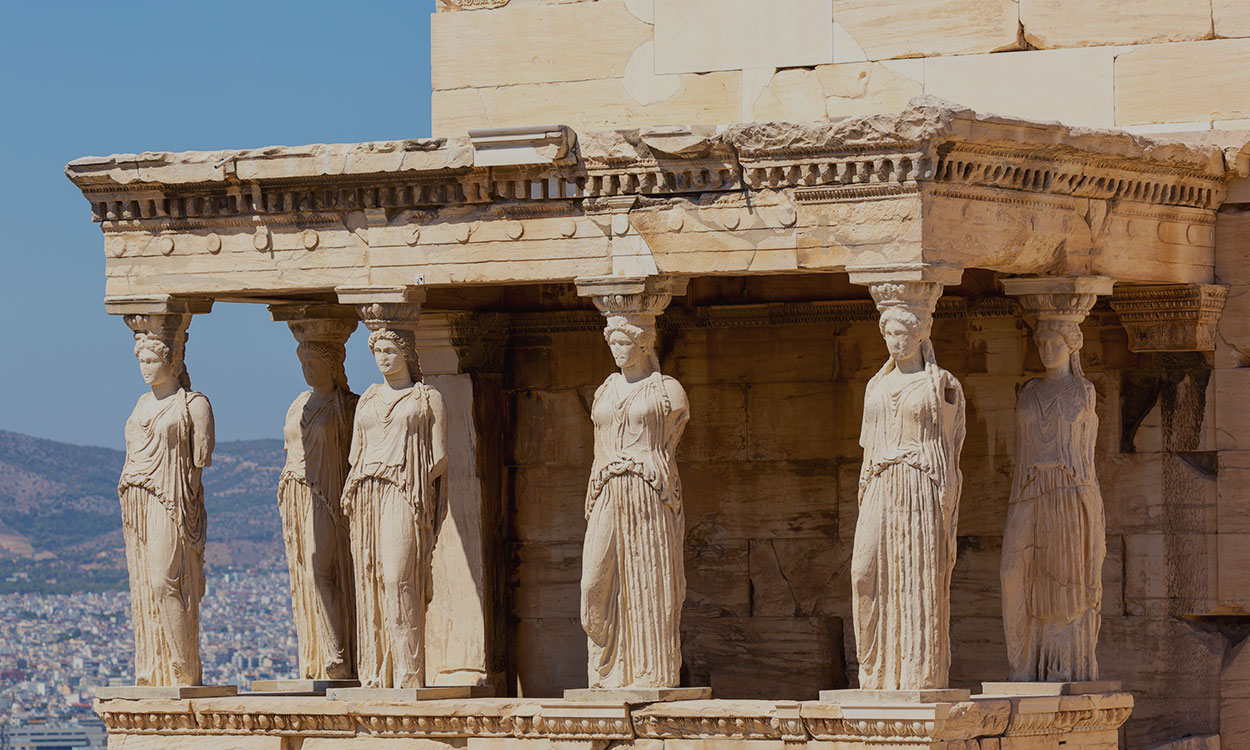 – The best time to visit the Greek capital (even if it is just for 2 days in Athens) is during the shoulder season, so around late spring, when the weather is pleasant and warm and there are smaller crowds in comparison with the peak summer period.

– To get from Eleftherios Venizelos International Airport to the city centre, you can use subway ,which is just a breath away from the airport of Athens) (choose the blue line), the airport bus (X95 buses terminate at Syntagma Square), the suburban railway, or a taxi (more costly between midnight and 5 am).

Some of the best areas in Athens to stay for a 2-day venture are Plaka, Thissio, Psiri, Koukaki, and Monastiraki, given their proximity to the most popular local landmarks.

– Getting a travel insurance might come in handy. EU residents can also issue a European Health Insurance Card in their home country in case an emergency comes up .

At Be A Greek, we help you create ideal tours in Athens city and enjoy Athens life. There are so many ways to get the most from your trip to Athens and we have built up some unique Athens experiences, tailored to your own needs.

The main attractions in Athens are walkable as they are located relatively close to one another. However, accessing some of them requires using some stairs and walking uphill.

The nearest beach to Athens is Edem Beach, which is located between Alimos and Paleo Faliro districts. It is a sandy, organized option that can be reached via the public transport within around half an hour. You may also take the tram from the Athens square and head a bit further out, to Voula, Vouliagmeni or Glyfada areas for a nice swim.

From The Acropolis to dinner at Monastiraki Square

Acropolis is the most famous archaeological site in Greece (opens daily at 8:00 am), whose citadel has also been declared as a UNESCO World Heritage Site, in 1987. Getting there involves climbing up several steps, which are certainly worth the effort, considering the “compensation” you get afterwards. While inside the Acropolis complex, you can lay eyes on an incredible range of landmarks, including the Parthenon Temple, the Temple of Athena Nike, the Erectheion, the Dionysus Theatre, and the Prolypaia (the 432 BC-built gate to the Acropolis citadel).

Tip: Get your tickets in advance so that you do not waste time waiting in queues, while there are also combo ticket options that enable you to get a discount if you visit three or more archaeological sites within the Acropolis. Also, please make sure you have 2 hours to visit the Acropolis and take in the heart-stopping seascapes and views of lush Lycabetus Hill, the Acropolis Museum, and the Temple of Olympian Zeus, spreading below your feet from the top of the ancient hill! 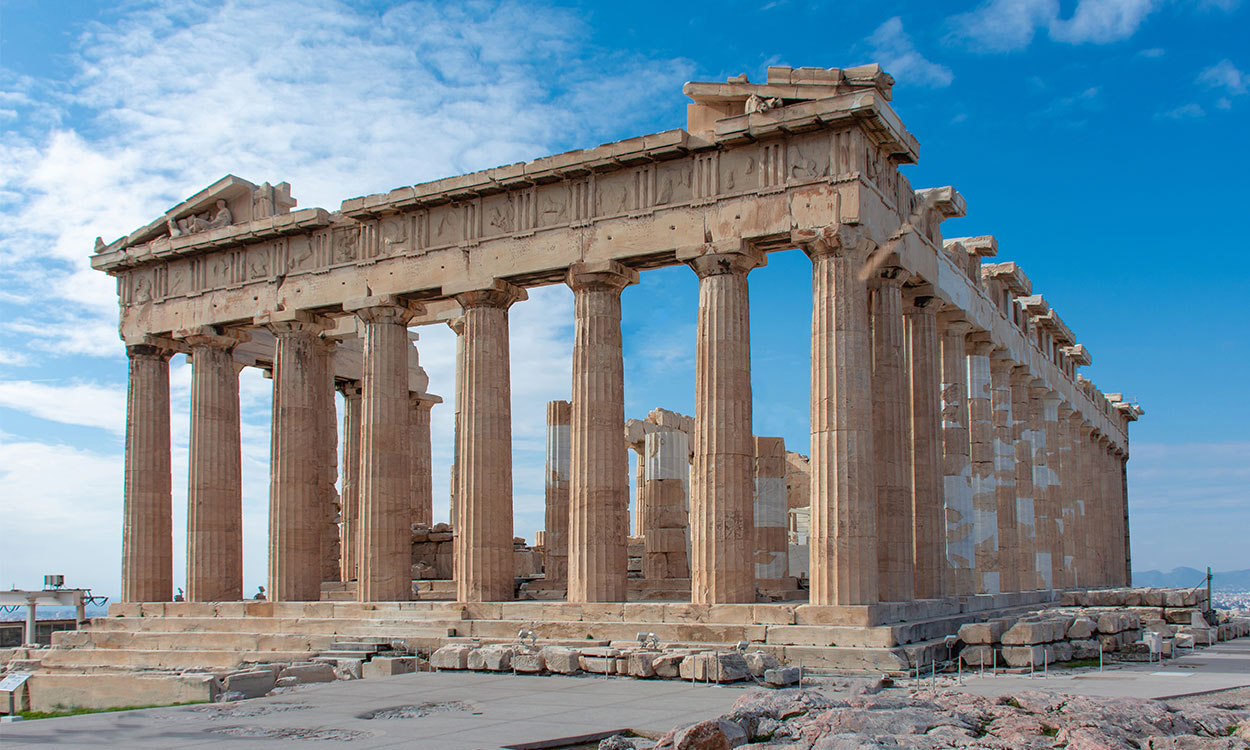 Sites to visit inside the Acropolis:

Built in around 432 BC in honor of ancient Olympian Greek Godless Athena, it hosts the iconic Temple of Erectheion (dedicated to Olympian Sea God Poseidon and Athena) with the infamous Caryatids and the Temple of Athena (once home to many more temples and ancient sites).

The Theatre of Dionysus

Within a short walking distance from the Acropolis, the ancient theatre is dedicated to God Dionysus and welcomes many ancient Greek tragedy performances in its grounds.

The Odeon of Herodes Atticus

A more recent addition to the other archaeological landmarks, it is an open-air theatre that hosts theatrical performances injected with a particularly magical flair in the summertime. If you happen to be around, do book a ticket for a concert or theatrical performance under the starry sky (you can thank us later!).

The Temple of Olympian Zeus

One of the most glorious temples of the ancient world ,it is dedicated to the King of the Olympian Gods. Built in 131 AD, during the reign of Hadrian (a Roman Emperor who also ordered the construction of other prime monuments in Athens, such as Hadrian’s Library), it is a must-visit for sure.

You will see the colossal gate on your way out of the Temple of the Olympian Zeus. It was built in 131 AD in honour of Hadrian.

Tip:The Caryatids you can see supporting the roof of Erectheion are replicas. Of the six original ones, five are on display at the New Acropolis Museum. Hopefully, the sixth one that is now in the British Museum will find its way back to the rest of the family soon.

The museum’s sole purpose of existence is to display ancient artefacts unearthed from the area around the Acropolis and the Parthenon. It opened its doors to the public in 2009 and is home to daily objects, vases, and statues (the most awe-inspiring being the original Caryatids), along with sculptures from the frieze of the Parthenon. As for the newly opened basement area, it enables visitors to get a good look into ancient Athens houses that have been excavated underneath!

Besides the important exhibits, though, the New Acropolis Museum also dazzles with its unique architecture featuring massive windows that allow lots of natural light to shower the place, plus fantastic views of the Parthenon!

You may also head to the Acropolis Cafe and enjoy the panoramic views during your break in your 2 days in Athens! 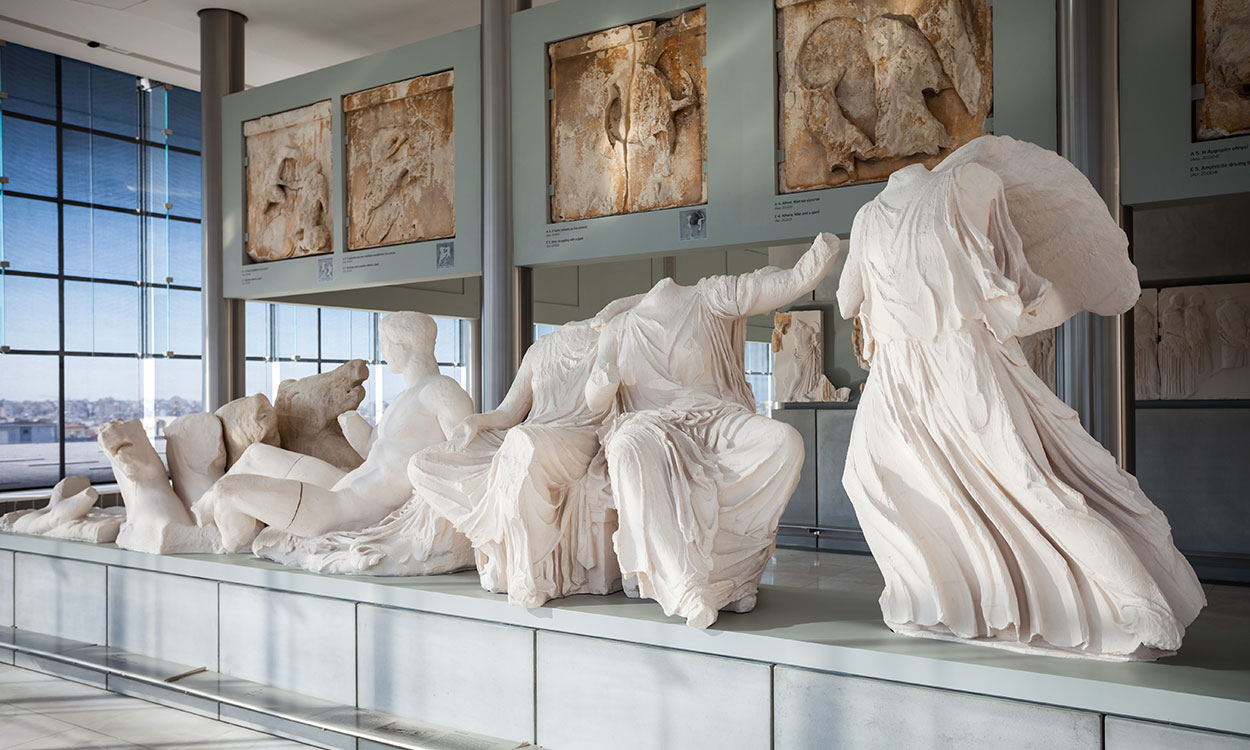 A superbly picturesque neighbourhood in Athens (and one of the oldest ones, too), where you can pamper your palate with delicious local cuisine (there are plenty of local tavernas, ouzeri, and restaurants to choose from) after you stroll around its cobblestone streets! Lined with colourful houses and featuring interesting street art and traditional Greek architecture, Plaka is also home to numerous souvenir shops selling from fur coats to leather goods, as well as a few cool art galleries and museums that we recommend that you visit, if you have the time.

While at Plaka, you could also consider heading to:

A quaint district sitting right above Plaka, with some of the oldest Athenian houses, dating back to the early 1800s.

Very close to Monastiraki Square and close to Anafiotika, it is a small archaeological site where the first meteorological station in the world is built (aka the Tower of the Winds). During the Roman Era, this used to be the main market area in Athens.

Unfortunately, you can only see the ruins of the once majestic library that contained the city’s records, literary books, historic books, and Athens’ archives.

For stunning sunset views and cityscapes, do consider going to Areopagus Hill, which is just a short walk from Hadrian’s Library. Also referred to as Areios Pagos, it served as a court in ancient times. It is also the place where Apostle Paul’s Orthodoxy speech took place in 51 AD. To close a fascinating day, you could visit Monastiraki Square to enjoy dinner or some evening cocktails at rooftop bars.

From Monastiraki Square to the Ancient Agora

Totally stunning and hypnotizing, this ancient site used to host the Great Panathenaea, the most significant athletic competition in Athens, at around 330 BC. This is also the venue that has welcomed the first modern-day Olympic Games. You can learn more about the history of the Olympic Games at the on-site museum, located inside the stadium.

Stop #2: The National Gardens of Athens

Designed by King Otto’s wife, Queen Amalia, the National Gardens is a magnificent park and a popular retreat from the noise and the hurried lifestyle of the city. While wandering around this magnetic natural wonder, expect to see hundreds of plant species and an amazing local flora, as well as scenic ponds, a staggering mosaic, and a few ancient ruins. 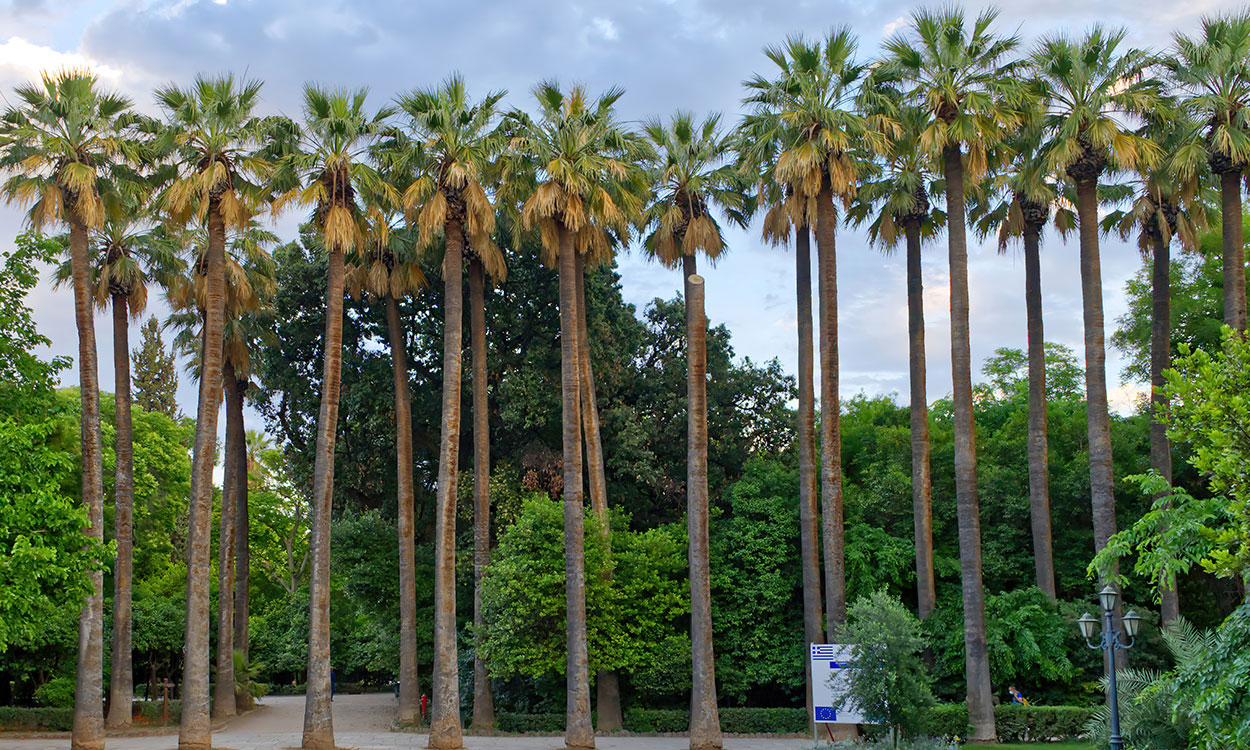 Within walking distance from the National Gardens lies the most central Athens point, Syntagma Square, with the Neoclassical stately Greek Parliament building in the spotlight. It served as King Otto’s (the first king after the country gained its independence) palace until 1935, when it shifted roles and became the Greek Parliament building. If you want to visit it, though, it is advised to pre-book your ticket, given the large numbers of visitors it receives annually.

While here, you can watch the famous ceremonial walk performed by specially selected Greek soldiers that is known as the Changing of the Guards (or the Changing of the Evzones), which takes place hourly by the solemn Tomb of the Unknown Soldier monument that has been built to honour the soldiers that have lost their lives during the wars Greece has been involved in over the years.

Time for some shopping at Ermou Street, right across the Greek Parliament. It is the main shopping street in Athens that greets visitors and locals alike with pedestrianized streets lined with all sorts of shops, from craft materials, homeware and clothes to fabrics and beads. Of course, you can come here for people-watching or window-shopping, while also admiring Kapnikarea, a famous 11th-century Byzantine church that turns heads with its frescoes. And, if you feel like resting for a moment, there are several bakeries and cafes to grab a bite around here!

Just a few steps from the flea market of Monastiraki is one of the most important locations of ancient Athenian life, the Ancient Agora site. This is the very place where many millennia ago, world-renowned Greek philosophers like Plato and Socrates would take their afternoon walks! Today, you can visit the 6th century ruins of the once popular meeting point for all Athenians, including the beautiful Temple of Hephaestus (built in 415 BC) that stands out as being one of the most excellently preserved ancient Greek temples, as well as the Church of Agioi Apostoloi that was constructed in the 10th century AD. While here you may also want to visit the small Ancient Agora Museum for a fascinating insight into life in ancient Athens.

Your 2 days in Athens have just come to an end. However, if you have a few hours to spare, we also suggest a visit to Kerameikos Ancient Cemetery, the National Archaeological Museum, Benaki Museum, and/or the Temple of Poseidon at Sounion!

Of course, you can search through the Internet and find a lot of information about all these places, but we are here to help you have it all organized and create your summer experience by crafting your own unique customized travel package.

At Be A Greek, we help you create your dream vacation in Greece without any hustle. There are countless ways to plan your vacation in Greece and we are here to provide you some of the best Greece vacation packages, tailored to your own needs and keeping up with you own pace.

Winter in Greece: A guide to Greece winter destinations